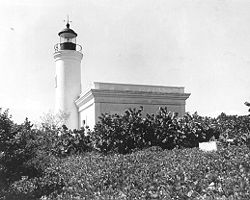 Lighthouse painted white; lantern is black. Original 6th order Sautier, Lemonier & Cie. Fresnel lens is on display in the Coast Guard Museum in San Juan. Marinas.com has aerial photos, Colón-Sepúlveda has a historic photo and an aerial photo of the island and lighthouse, the Coast Guard also has a historic photo, and Google has a satellite view. Mari-Mutt writes that salt spray has severely corroded the lantern and the lighthouse is probably in need of a complete restoration. Located on the highest point of a small island about 1.2 miles southeast of Ponce, marking the entrance to Ponce harbor.

The Ponce or Cardona Island lighthouse entered service on August 15, 1889. It was designed by Manuel Maese, amended by Rafael Ravena and built by the government itself, on this six-acre island located two kilometers south of Ponce. This lighthouse was not included in the island’s original illumination plan but was added due to the pressure of the Playa de Ponce businessmen, who in 1880 paid for the installation of a primitive lighthouse on the Port Authority building.

The initiative was quickly rejected by the central government, which ordered the light seized and operated by an auxiliary keeper until an adequate lighthouse could be constructed. The Ponce port and Cardona were considered as possible locations and Cardona was chosen mainly because it was one of the obstacles to navigation in the area. The building measures 48 feet long by 27 feet wide and resembles superficially the Arroyo and the two Vieques lighthouses, but is smaller, has a different distribution of spaces, and its 32-feet tower is cylindrical and connects to the rear face of the building.

The structure was originally painted light blue with white details and black baseboard. The sixth-order lens projected its light eight miles away and was used at least until 1978. Today it is housed in the Coast Guard museum in San Juan, its base bears the inscription Sautier, Lemonier & Cie Paris 1888. The lighthouse was closed around 1950 and automated in 1962, it currently operates with a lantern fed by solar panels. Although its external condition is good, salt spray has severely corroded the lantern and humidity may have damaged the interior of the structure, which is completely surrounded by vegetation. 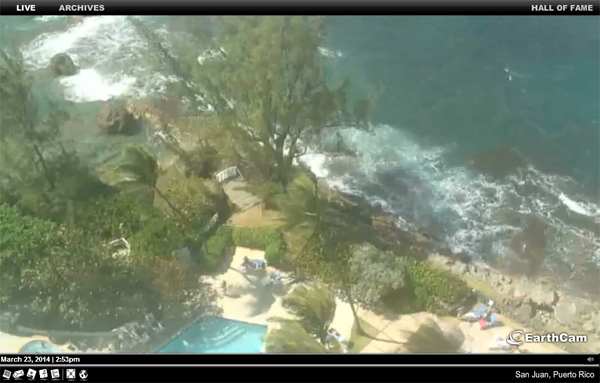