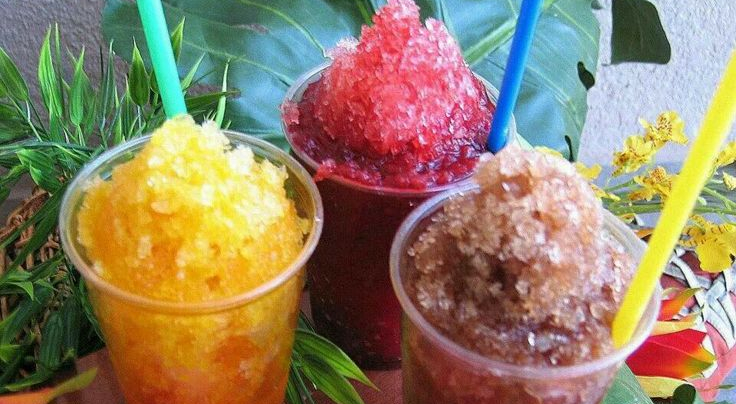 A Piragua /pi’ra:gwe/  is a Puerto Rican shaved ice dessert, shaped like a pyramid, consisting of shaved ice and covered with fruit flavored syrup. Piraguas are sold by vendors, known as piragüeros, in small colorful pushcarts. Besides Puerto Rico, Piraguas can be found in the United States mainland areas, such as New York and Central Florida, which have large Puerto Rican communities.

In most Spanish-speaking countries, the word piragua (pi·ra·gua) means pirogue, a small, flat-bottomed boat. In Puerto Rico the word piragua refers to a frozen treat made of shaved ice and covered with fruit flavored syrup. Unlike the American snow cone which is round and resembles a snowball, the piragua is pointy and shaped like a pyramid.

The piragua vendor is known as the “piragüero”. Most piragüeros sell their product from a colorful wooden pushcart that carries an umbrella, instead of from a fixed stand or kiosk. The piragüero makes the treats from the shavings off a block of solid ice which is located inside his cart  and mixtures of fruit-flavored syrups.  The tropical syrup flavors vary from lemon and strawberry to passion fruit and guava. Once the syrups are ready, the piragüero will go to his place of business, which in Puerto Rico is usually close to the town plaza, while in the United States it is usually close to the public parks near Hispanic neighborhoods, to sell his product.

In the process of preparing a piragua, the piragüero shaves the ice from the block of ice with a Hand Ice Shaver.  He then puts the shaved ice into a cup and uses a funnel shaped tool, which resembles a cone-pyramid, to give it the distinctive pyramid shape. The piragüero finishes making the piragua when he pours the desired flavored syrup. Unlike the typical American snow cone, which is often eaten with a spoon, the piragua is eaten straight out of the cup or is sipped through a straw.   Piragüeros are only out on hot sunny days because those are the only days when they can expect good business.

The word “piragua” is composed of two words: “pira” from pyramid which explains the conical pyramid shape paper cup used mostly in Puerto Rico and “agua” Spanish for water, the solid water ice that it is made from.

The more common flavored syrups used in the “piraguas” are the following: 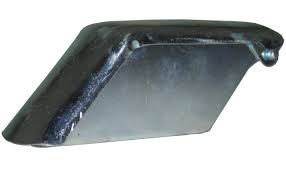 type of Hand Ice Shaver used by the Piragüero 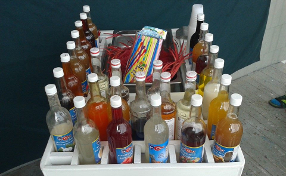 Piragua Cart with Block of ice and syrups 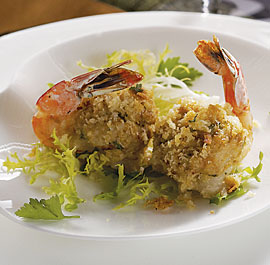