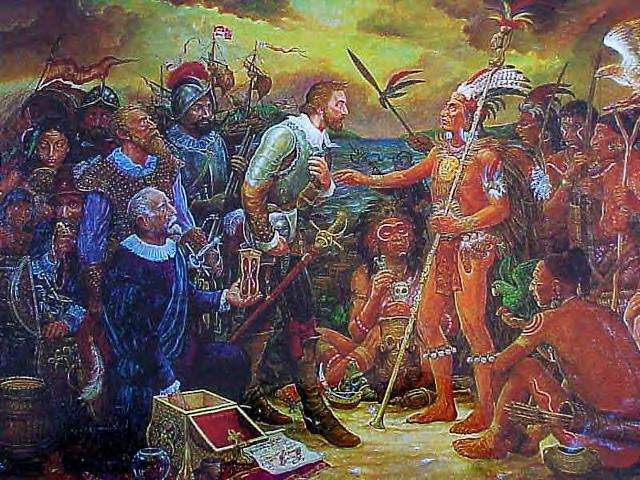 Puerto Rico is one of 7,000 islands in the cluster of islands known as The West Indies. Archeologists and geologists have been unable to determine exactly when Puerto Rico became inhabited. They determined that centeries ago, people referred to as “Archaics”, came to the Caribbean from North America, mainly Florida. The next people to inhabit Puerto Rico were The Igneris, from a region of Venezuela. The Igneris were followed by another group from the Arawak Culture, The Tainos. History shows that the Tainos were a more advanced group then the previous groups. They gave their new home a name, the first group to do so. They called it “Borinquen” which is now known as Puerto Rico, meaning land of the Regal Lord. Borinquen, a place that was mostly a rain forest from shore to shore. A place filled with hundreds of different species of palm trees, bamboo, giant ferns, guava trees, mamey and the big leaves of the yautia. The island also was filled with many species of wildlife such as manatees, parrots, iguanas, giant sea turtles, and crabs. Boringuen also had many rivers with many different species of fish. Every evening the cool breeze from the ocean was filled with the sounds of the millions of coquies (tree frogs).

The Tainos established a structured society. They developed villages all over the island. All the villages were designed exactly the same. Each contained an open area in the center, to look like the center of town. This open area was called the batey. From each side of the open area, were narrow lanes stretching outward lines their living spaces (houses). The batey was the center for all the social activities of the Tainos. They conducted town meetings qnd religiouis ceremonies. They also held tribal dances in the batey.

The Yucayeques were build close to a water source with a courtyard (batey) in the middle and under the tall trees. A tall fence surrounded the village. A road leading directly to the water source with a lookout tower on each side was built from the batey. Farms (Conucas) were placed around the yucayeques. The conucas were tall mounds of loose dirt for farming. These mounds were 10 to 15 feet wide and as tall as the Tainos. They planted yucca in the conucas because the yucca needed soil that was aerated. The Tainos social structure was much like that of the Incas of South America. Each village had a leader (Chief) and then the whole island had a leader, whom was chosen from the leaders of the village leaders (Chieftain).

The village chief of (Cacique) was an inherited position. The cacique was polygamous. Some of the wives were arranged to women from other villages in order to form strong alliances. The cacique wore a head piece made from a cloth band and a gold seal or amulet and was adorned with feathers of different colors from the macaw and parrot. He also wore a mao which was a round cloth with a hole in the center used to cover the chest, back and shoulders.

The Tainos social structure was that of a caste system just like that of the Incas. The top included the island chieftain and his family, the village chiefs and their family. Next level was the priests (medicine-men). The responsibilities of guiding them in spirit and health made these priests the most important and respected members of the Taino villages.

The priests cured various sicknesses with the use of herbal teas. They also looked after the villages spiritual needs, by warding off evil spirits by chanting prayers to the Gods to protect them. To appease the evil spirits that would bring storms and earthquakes, the priests would go into a trance to contact the Gods by sniffing ground tabacco. The caste system divided the Tainos into two groups. The largest group was the labor force. The other group was the teachers and the leaders (supervisors) that ran the day to day operations. This group instructed the labor group on maintaining the soil for growing a variety of vegetables of herbs, which was the Tainos main diet. The Taino economy was manly agricultural. The Taino people grew cabbage, peanuts, peppers, corn and sweet potatoes. The Tainos also gathered cotton, fruits, and tobacco which grew wild all over the island. By the fifteenth century, there were about 30,000 to 60,000 Tainos on the island. After many raids by other tribes in attempt to invade and conquer the island of Borinquen, they were mainly attached by the Caribs from South America. The Caribs sailed the Caribbean Ocean in huge boats. Time and time again the Caribs raided the Taino settlements taking women and children back to their villages in South America.

Columbus on his second voyage had a fleet of seventeen ships that landed on the Island of Borinquen as the Tainos called it. Upon landing on the island, Columbus claimed the island for Spain and called it San Juan Bautista, after the son of the King and Queen of Spain.

When Columbus first set foot on the island, he didn’t encounter any natives. After walking towards the interior of the island, Columbus found a small village on a narrow inlet. He was amazed by the landscapes, beautiful tall trees. He named the village Puerto Rico, which means beautiful or rich port. After the native Tainos overcame the sight of the many ships and hundreds of men carrying weapons and wearing colorful uniforms, some of the Tainos made contact with Columbus. Columbus communicated with the Tainos through hand gestures, and soon Columbus was able to learn of some of the more amazing accomplishments the Tainos had made. He was impressed with the pottery the Tainos showed him. He was even more impressed with the pieces of gold they showed him. When Columbus left the island, there were about 30,000 Tainos on the island. Columbus went back to Spain to report to the King and Queen about all that he encountered in the new land. He told them of all the wonderful discoveries he made. How the Tainos built communities. Homes that were like artworks made out of straw and wood. The Tainos had different forms to express themselves through sculpture, art, ceramics, jewelry, dance, music and poetry.